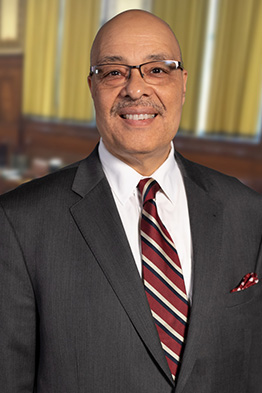 Rev. Burgess is currently serving his second term on Pittsburgh’s City Council representing the neighborhoods of Homewood, Larimer, North Point Breeze, East Hills, Lincoln-Lemington-Belmar, East Liberty, Garfield, Stanton Heights and Friendship. During his tenure he has been constantly advocating for the rights of low-moderate income people by creating legislation that empowers the community to be a part of the government process.

Councilman Rev. Ricky Burgess is guided a strong belief in the community of Pittsburgh and in the greater community he serves. For the past 30 years, Rev. Burgess has been pastor of the Nazarene Baptist Church.

In that capacity, Rev. Burgess has served with faithful distinction with a firm belief in the greater power that guides and offers hope for us all. Over the last 23 years, he also served as a Professor of Communications at Community College of Allegheny County.

Rev. Burgess is a member of the Board of Commissioners for the Housing Authority for City of Pittsburgh. He has worked to establish clean safe affordable housing for the residents of Pittsburgh. Rev. Burgess has also been an active Board Member of the Pittsburgh Pastoral Institute, Allegheny Union Baptist Association and Homewood Community Ministries.

Rev. Burgess graduated from Central Catholic High School and then LaSalle University and has earned a Masters from Eastern Michigan University. He has also studied at Penn State University and the Pittsburgh Theological University.

Married to Carlotta K. Burgess for the past 30 years, Rev. Burgess has helped to raise three sons, Richard, John and William, as well as one daughter, Candace.