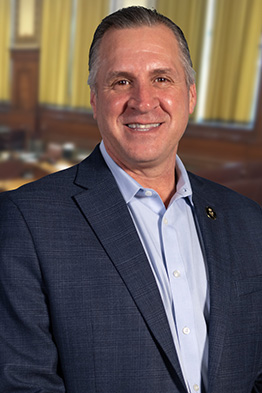 Anthony Coghill was born and raised in the City of Pittsburgh, in the neighborhood of Beechview. He attended Pittsburgh Publics Schools and after graduating went into the roofing business. After mastering the trade, Anthony then decided to venture out on his own, and at the age of 30, founded Coghill Roofing Company in 1996.

Always interested in politics and wanting to get more involved in the community, Anthony took his first position in government working as a constituent liaison for State Senator Wayne Fontana. In 2010, Anthony was elected as an Allegheny County Democratic Committeeman. After being re-elected to a second term in 2014, Anthony was honored to be nominated and elected by the committee and now serves as the Chairman of the 19th Ward, only the third person to do so in the past 60 years.

With a continued desire to serve the constituents of his neighborhood, Anthony decided to pursue the Pittsburgh City Council seat in District 4. Running on a campaign of “Back to Basics,” Anthony pledged to emphasize safe neighborhoods, sustainable infrastructure, clean water, and equal distribution of our tax dollars in south Pittsburgh. The residents of District 4 agreed with Anthony’s platform and on November 7th, 2017, he was overwhelmingly elected to serve the district with over 80 percent of the vote.  On January 3rd, 2018, Anthony was sworn in as part of the 140th City Council to serve the neighborhoods of Beechview, Brookline, Carrick, Bon Air, Overbrook, and Mt. Washington.

Anthony is the proud father of his beautiful daughter Kelli, who loves to travel the world and is currently a Communication Specialist at Coghill Investment Strategies. He is engaged to the love of his life, Lisa Orlando. Lisa has partnered with Anthony and has supported him in his political endeavors over the years and is so very proud of his many accomplishments and successes.