Due to COVID-19 safety concerns, all members of the District 8 Office will be working remotely until further notice. If you need to contact our office please don't hesitate to call us or reach us by e-mail at district8@pittsburghpa.gov.

In 2017, the District 8 office worked with stakeholders from four of the commercial streets in the district - South Craig Street, Walnut Street, Ellsworth Avenue, and South Highland Avenue - to reimagine how the look and feel of each of these corridors could improve. Working alongside business and restaurant owners, property owners, the Shadyside Chamber of Commerce, and the Oakland Business Improvement District, with support from the Urban Redevelopment Authority, the experts at the Studio or Spatial Practice, led each of the business districts through a series of brainstorming discussions and activities. The links below represent the final reports for each corridor. Currently, we are working to raise funds and implement the redesigns found in the report. 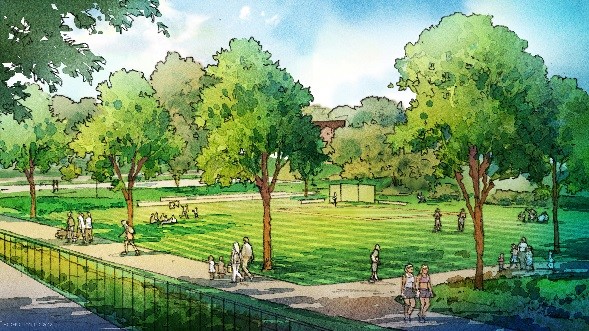 By engaging in a comprehensive, community-based planning process, Councilperson Strassburger led the way for the renovation of Wightman Park, which recently completed construction. The renovations included in this project help to mitigate neighborhood flooding and citywide storm water overflow issues, beautify the park space, create additional recreational opportunities, and offer families a variety of activities for all ages and abilities. Wightman Park features a range of green infrastructure improvements to help manage stormwater runoff, diverse play spaces and equipment to serve the interests of all children, public art installations, green spaces, and recreational facilities. https://www.pittsburghpa.gov/wightmanparkproject/index.html

In collaboration with the City's Department of Mobility and Infrastructure (DOMI), Councilperson Strassburger led a community-driven process to create a safer and calmer S. Dallas Avenue for all users. Previously, the median speed on the City-owned portion of S. Dallas Avenue (from Forbes Avenue to Wilkins Avenue) was 37.5 MPH, causing unsafe conditions for pedestrians, cyclists, and motorists alike. Councilperson Strassburger led a neighborhood process through which the traffic calming measures were identified as priorities for nearby residents. DOMI installed new lane markings in high-visibility, more durable thermoplastic to narrow the roadway, reduce speeding, and create safer crossings for pedestrians. In addition, pedestrian refuge islands with accompanying bollards and curbing enable pedestrians to cross one lane of the busy street at a time. On the PennDOT-owned portion, Councilperson Strassburger worked with St. Bede School to expand the School Speed Zone to S. Dallas Avenue. 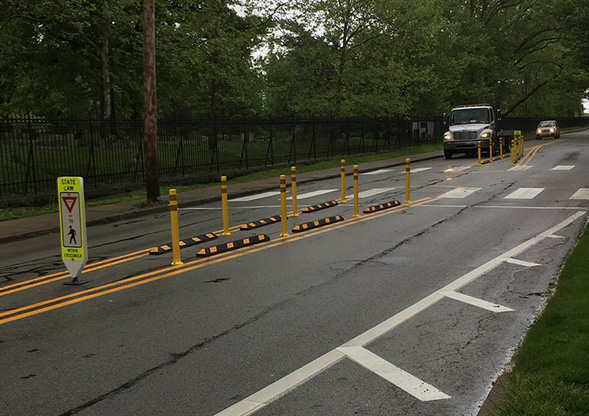 Tour of City Hall for Immigrants

Councilperson Strassburger worked with the Latino Community Center to host a tour of City Hall for immigrants and refugees. Participants heard from City Department heads and Pittsburgh Police leadership, learned about City services, asked questions about City resources, and were given a tour of the City-County Building. The Councilperson plans to host additional events in the future for Pittsburgh's growing immigrant and refugee populations. 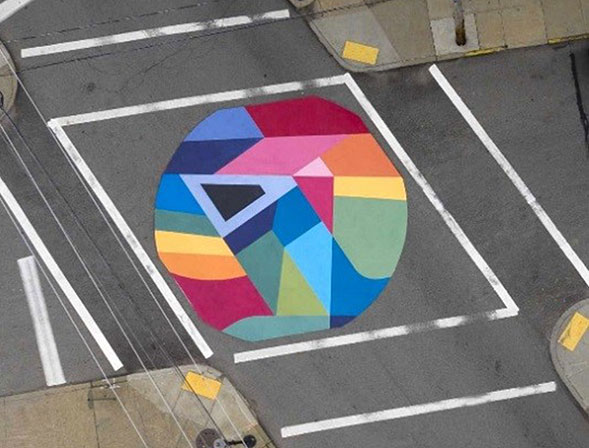 In partnership with the Public Art and Civic Design Division (PA+CD) in the City's Department of City Planning, Councilperson Strassburger initiated an artist-designed intersection project at Ellsworth and Maryland Avenues to celebrate the city's LGBTQIA+ community, commemorate the 50th anniversary of the Stonewall Uprising, enliven the Ellsworth Avenue business district, and mark this intersection as a point of civic pride for the region. The project team commissioned renowned muralist Leonardo Moleiro, who designed a graphic cubism take on the rainbow pride flag.

Councilperson Strassburger authored legislation to prohibit employment-based discrimination against pregnant workers and their partners before, during, and after the nine-month gestation period. The bill, which was passed unanimously by City Council and signed by the Mayor, makes Pittsburgh one of the only municipalities nationwide to ban employment-based discrimination against partners of pregnant workers and one of the few jurisdictions to prohibit discrimination before and after the gestation period. To accompany the bill, Councilperson Strassburger worked with the City's Commission on Human Relations (CHR) to create a guidance document so employers understand their rights and responsibilities under the new law and to empower employers to create anti-discrimination policies of their own. Read more about the legislation here and read the CHR Guidance Document here. 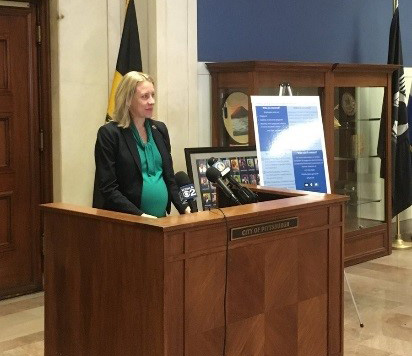 To further the City’s Zero Waste goal, Councilperson Strassburger championed important legislation to update Pittsburgh’s Waste and Recycling Code. In April, City Council unanimously approved these changes, which will make it easier for residents to recycle. Included in the updates are stricter standards for waste and recycling containers, stronger storage guidelines to prevent contamination, and new requirements for certain landlords to distribute storage containers. I am hopeful that this initiative will be an important step toward the broader sustainable transformation of our community.

Standing with immigration advocacy organizations, Councilperson Strassburger sponsored a resolution condemning the Trump Administration's policies, including the federal government's deportation of asylum seekers fleeing dangerous situations in their native countries, the detention of immigrant children, and the elimination of Temporary Protected Status, which allows individuals who experience war, famine, and other life-threatening afflictions to stay in the United States. You can read the resolution here.