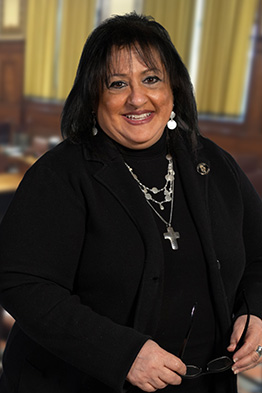 Councilwoman Smith was elected in February of 2009 as a member of Pittsburgh City Council representing District 2 neighborhoods. She was appointed as chairperson for the Committee on Public Works and is serving as Council President Pro Tempore.

Theresa lived in the city nearly her entire life and raised her three children in Pittsburgh. As her children grew, so did her civic engagements. She became involved with and worked at a host of nonprofit organizations such as the Pittsburgh Public Schools, The Neighborhood Learning Alliance, and many local athletic associations and community groups. She has nearly three decades of experience in volunteerism. Through her extensive volunteering, she gained a vast amount of knowledge of the neighborhoods in the City of Pittsburgh and its residents. Theresa is currently a board member of the Pittsburgh Land Bank and Bishop Canevin High School and is a member of the Allegheny County Democratic Committee.

As a member of Council, Theresa is dedicated to everyday quality of life issues. Since being elected in 2009, she has worked on the social service, development and environmental needs of District 2.

Theresa comes from a very large family and currently, resides in the Westwood section of District 2. She has raised three wonderful children and enjoys spending quality time with her six grandchildren.