Due to COVID-19 safety concerns, members of the District 8 Office may be working remotely until further notice. If you need to contact our office, please don't hesitate to call us or reach us by e-mail at district8@pittsburghpa.gov. 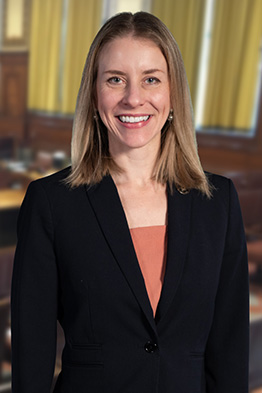 Erika Strassburger is a member of Pittsburgh City Council, proudly serving the residents of the City’s 8th District. She is the first woman elected to this seat. Before her election, Erika served as Chief of Staff for her predecessor, former-Councilman Dan Gilman. Prior to that, she worked for nearly a decade advocating for clean air, clean water, and a clean energy future at the state and federal levels.

Since being sworn into City Council in April of 2018, Erika has passed trailblazing legislation to guard against employment discrimination for pregnant workers and their partners throughout Pittsburgh; led the charge to overhaul and modernize Pittsburgh’s municipal waste and recycling code;  passed policies to prevent against discrimination based on gender identity and expression citywide; pursed a comprehensive lead safety law to keep dangerous toxins out of our homes and community centers; and secured passage of a landmark ban on single-use plastic bags at checkout which goes into effect in April 2023.

As the Council Member representing the Squirrel Hill neighborhood of Pittsburgh, Erika was immediately impacted by the October 27, 2018 mass shooting at the Tree of Life Synagogue. In response, she helped lead the way on a package of ordinances to ban the use of assault weapons and certain firearm accessories, implement red flag policies for those at risk of harming themselves or others, prevent the extreme risk to children by holding gun owners accountable, and increase funding for the City’s violence prevention initiatives.

Erika has been an outspoken advocate for policies promoting clean water and air, equitable and diverse communities, safe and complete streets, and an, transparent, and responsive government. She is passionate about offering new ways for her constituents to be informed & involved in city government.

Erika graduated from Bucknell University with a degree in Environmental Studies and a minor in International Relations. She lives in Squirrel Hill with her husband, Jordan, and her son, Evan.