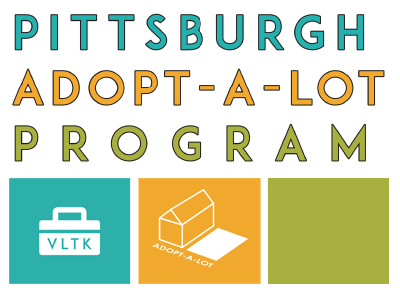 In 2013, the City's Open Space Plan recommended that a streamline process be created to allow residents to access city-owned vacant land to beautify their communities and to hire a point person to manage the projects. In 2014, the city hired an Open Space Specialist, and began to engage community stakeholders like GTECH, Grow Pittsburgh, Western Pennsylvania Conservancy, Penn State Extension, and Tree Pittsburgh, as well as city departments with a concern as to what happens on city land including Real Estate, Finance, Public Works, the Mayor's Office, and Sustainability. The result was the Vacant Lot Toolkit, a guide to transforming vacant lots into community assets.

The Adopt-A-Lot program, developed as part of the Vacant Lot Toolkit, was created to allow residents a streamlined process by which to access city-owned vacant lots for food, flower or rain gardens. In an effort to combat the problem of vacant city-owned lots, the program had three goals:

In the first two years, 114 vacant lots have been transformed around the city as part of 40 community projects — a total of 10 acres of formerly vacant land now community assets.

Fill out the Adopt-A-Lot Intake Form to get started today.