The EcoInnovation District Plan was formally adopted by the City Planning Commission on September 12, 2017. Since that time, the community has organized the Uptown Task Force, which provides district governance and collaboration. There are four subcommittees of the Uptown Task Force that focus on implementing the four chapters of the plan. The task force meets every month, and the subcommittees adopt annual work plans that focus their activities on priority projects. Early projects including rezoning the Uptown area to incentivize development consistent with community goals, a community-driven proposal for a publicly-owned development site at Fifth and Dinwiddie, and a number of park and stormwater management projects.

The creation of the EcoInnovation District Plan was a two-year process to help support the community and assets within Uptown and West Oakland, and to help spur development and revitalize this major corridor between Downtown and Oakland. With new projects on the horizon in Pittsburgh, such as the bus rapid transit system, Uptown has an opportunity to grow and create a more welcoming environment for residents. Since the adoption of the EID plan by the city's Planning Commission in September 2017. Following adoption, community organizations, institutions, employers, and public agency partners have worked together to implement the plan through projects and programs.

Uptown extends along the Fifth and Forbes Avenue corridors from I-579 to Robinson Street and is nestled between two of the top three largest employment centers in Pennsylvania — Downtown Pittsburgh and Oakland. In 2015, there were 109,050 jobs in Greater Downtown Pittsburgh, including 8,000 jobs in Uptown. Many of Uptown’s jobs are linked to Duquesne University, UPMC’s Mercy Hospital and the district’s growing biomedical and technology startup spaces. Greater Downtown accounts for nearly 40% of all jobs in Pittsburgh. To the east, Oakland is home to the University of Pittsburgh, Carnegie Mellon University, Carlow University, world class medicine at UPMC’s Magee and Presbyterian Hospitals, and a growing number of small and established businesses. An investment in Uptown is within a short commute to over 150,000 jobs. To support Pittsburgh’s growing economy, Uptown is uniquely positioned to provide new spaces in a location easily accessible to these job centers.

Today, there approximately 1,000 residents that are extremely diverse in terms of income and race. With a large and active population of artists and activists, Uptown has a distinctive character and deep pride about its history and future. Institutions play a prominent role in Uptown as a source of employment, as anchor real estate holders and contributors to the wellbeing of the community. There are over 20 institutions providing a range of services to community members in Uptown and beyond. These institutions, both large and small, form an essential social fabric of the community and support what is an emerging innovation community. Avenu and Duquesne University both actively support research and small business activities and the community is home to vision and hearing research and services, small biotech companies, creative businesses and makers. 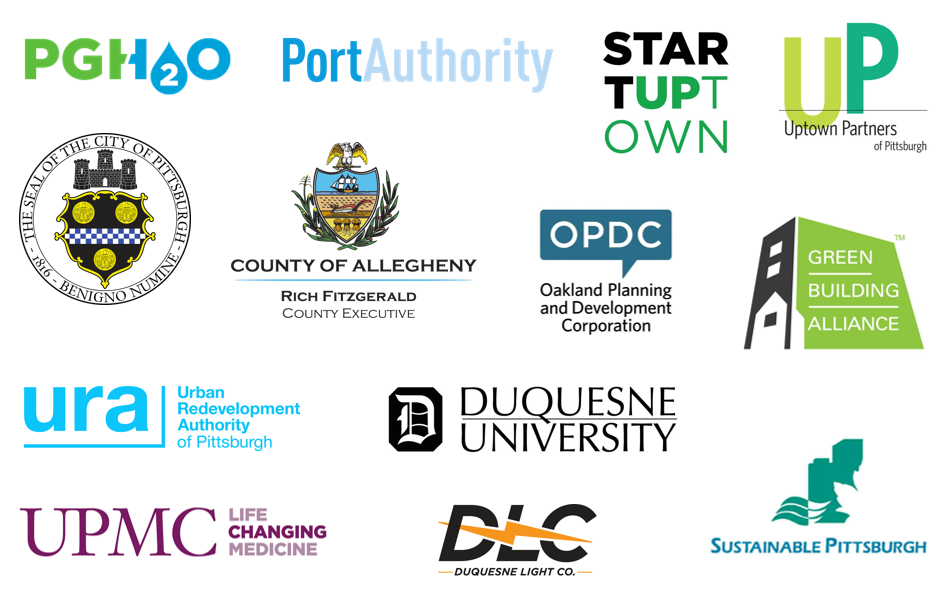 What’s in the Plan

The EcoInnovation District Plan is comprised of four main chapters that address strengths, weaknesses, and opportunities to be built upon in order to help reinvest in Uptown and support current and future residents. Each of these chapters — Community, Development, Mobility, and Infrastructure — are broken into actionable items by the City of Pittsburgh, community leaders, and other partners. For more information on each item, see the corresponding chapter within the plan.

More public engagement details can be found starting on page 10 of the EcoInnovation District Plan.

Over the past century, Uptown and West Oakland have faced many significant challenges. What was at one time a diverse community of about 8,500 people in 1910, many of which worked in adjacent factories and mills, declined to 3,220 residents in 1990 of which 58% or 1,860 were students. During this decline, major institutions stepped in to create campuses that today provide thousands of jobs to Pittsburgh residents. The result is not just a loss of population but of the townhomes, small scale warehouses and structures that make Uptown unique. Of the 6,600 residents in the community according to the 2010 Census, about 5,930 of these are either students living on Duquesne’s campus or prisoners in the Allegheny County Jail along the River.

Today there are about 1,000 residents in Uptown who face many day-to-day challenges. Concerns about rising housing prices, crime (both real and perceived) and the continued loss of historic buildings are frequently raised. Ensuring that Uptown grows equitably, that job opportunities are accessible to residents and that the community both tackle some long-standing day-today challenges while keeping Uptown…Uptown, represents the core of the EcoInnovation District plan. 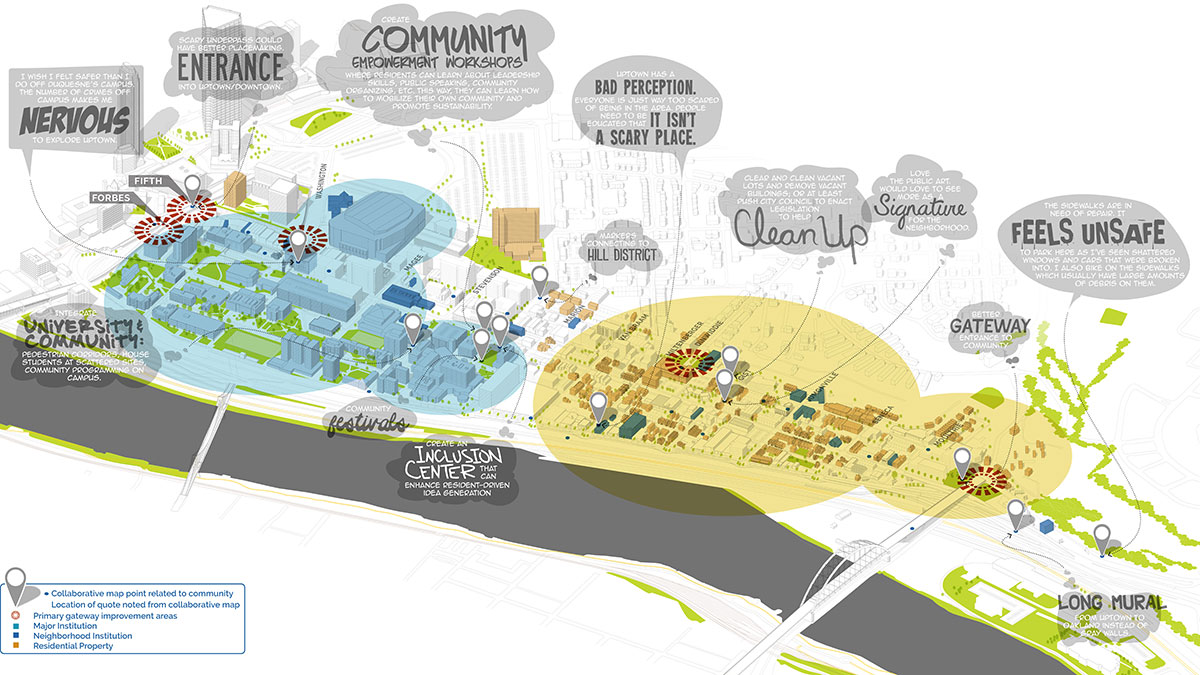 1.1 INVEST IN EXISTING RESIDENTS & PROTECT THE RESIDENTIAL CORE OF THE COMMUNITY

1.2   PROMOTE DIVERSITY AND INCLUSION IN THE INNOVATION COMMUNITY

1.4    WORK TOGETHER TO TACKLE VACANCY AND COMMUNITY SAFETY

Given Uptown’s unique location, it’s remarkable that investment has, in many ways, bypassed the community. According to the land use survey analysis conducted at the beginning of the EcoInnovation process, 37% of the land in Uptown is underutilized - consisting of surface parking lots or vacant buildings/land. Pittsburgh’s office market is approaching “Full” and Uptown is primed to absorb some of the spillover investment from Downtown and Oakland. As the City’s innovation economy grows, small and growing businesses will need affordable space to succeed. Uptown contains a building types that have historically supported a mix of small scale manufacturing and light industry. These buildings are often well-suited for such start-up businesses through reuse. To maximize the potential of Uptown as a home for small businesses, it is imperative to preserve these buildings and work to fill them with new activity.

Uptown also has the potential to meet growing demand for housing. In order to meet this demand and help prevent a rise in housing costs, new development should be encouraged. Through a mix of new construction as well as rehabilitation of existing vacant buildings, there is ample opportunity to meet the demand while preserving Uptown’s existing character, and ultimately re-establish the vibrant mix of uses that once characterized the Fifth and Forbes corridors. To encourage investment but also retain Uptown’s character, the existing zoning needs to be replaced. Using the City’s p4 initiative as inspiration, the proposed Uptown Public Realm District seeks to simplify the existing code but also incentivize new development in ways that help to address some major issues in the community including affordability, stormwater, energy and preservation. 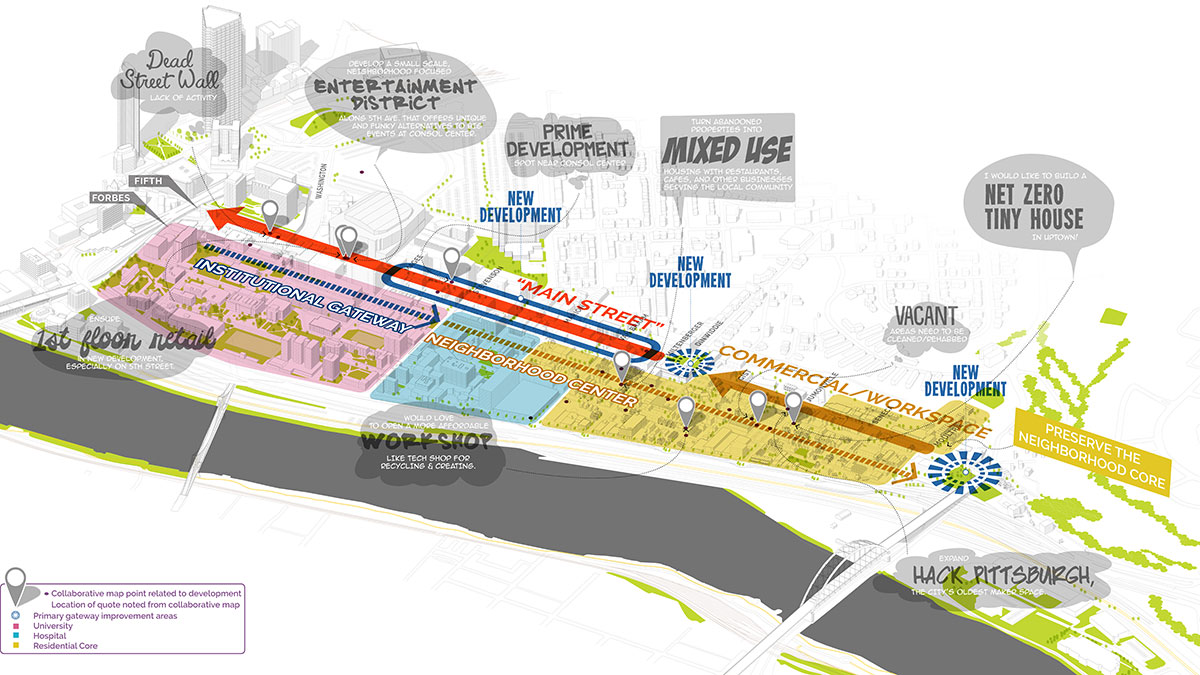 Uptown and West Oakland’s transportation system is one of the community’s biggest assets, with some of Pittsburgh’s most robust transit, bridge, and highway connections. On the other hand, this same infrastructure – and its associated traffic – often serve to overwhelm the neighborhood, encouraging trips through Uptown and West Oakland rather than to them. This generates a significant amount of vehicular traffic, traffic crashes, and air and noise pollution.

After housing, transportation is typically the second highest factor in a household’s cost of living, and residents of Uptown have many opportunities to reduce these costs. Operating, insuring, and maintaining a car costs an average of $9,000 per year. Because of its walkable scale (if not walkable streets) and frequent buses along Fifth and Forbes Avenues, it’s possible to live without a car in Uptown – and some people do. But walking, bicycling and taking transit is not always easy in Uptown. Some steep hills, poor sidewalks and fast moving traffic makes walking unpleasant and at times unsafe. There are no bike lanes that protect bicyclers from traffic, buses often get stuck in traffic due to large commuter use, and often residents must leave the neighborhood to acquire basic household goods. While the study area’s modest size may preclude changes at the regional or citywide scale, the EcoInnovation District is the perfect size to test and refine the most innovative emerging concepts in sustainable and equitable urban mobility, serving as a proof-of-concept well beyond the borders of Uptown and West Oakland. 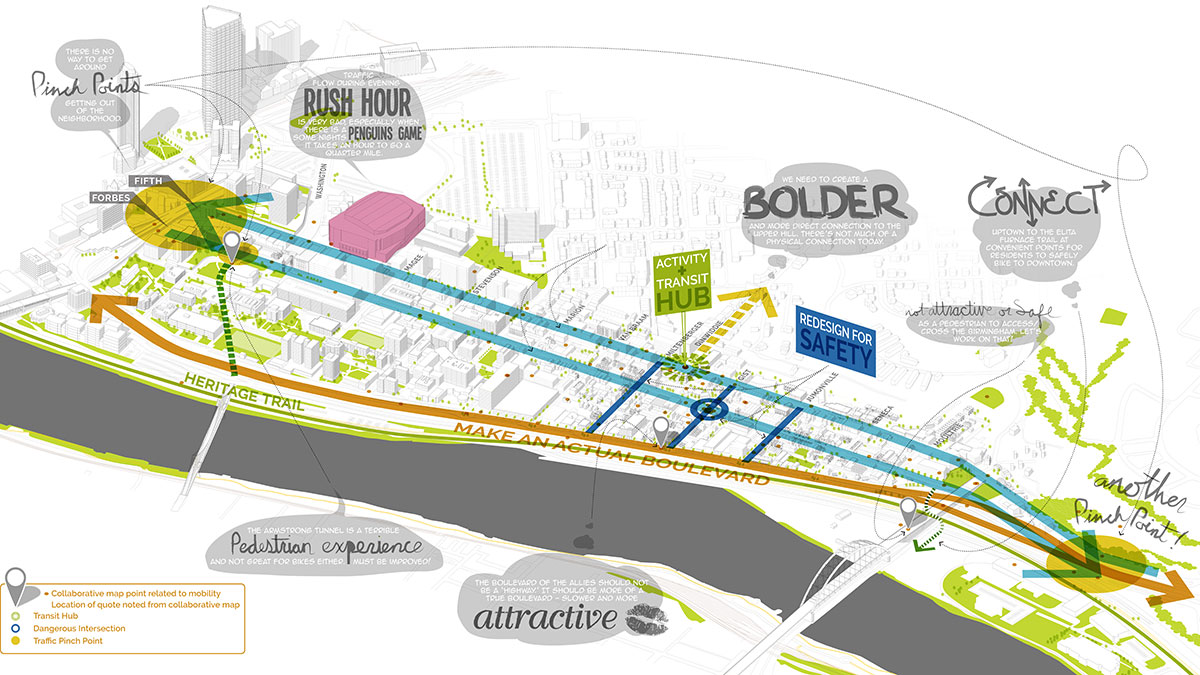 Uptown is blessed with some potentially amazing natural assets: an incredible wooded hillside to the northeast that could serve in both an open space and ecological capacity; and a stunning 180-degree view down to the Monongahela River — if one could safely connect to the hillside bluff overlooking the river. It also boasts an emerging urban agriculture movement, experiments in public art and landscape throughout the neighborhood, small but socially important gathering spaces like the Tustin Street Playground and community garden, and an incredibly energetic set of residents at work in these spaces and efforts.

Unfortunately, many of these assets are yet untapped or mostly unrealized. They lack physical and visual access to them, connections between and among them, and have limited resources to support major upgrades or expansion except for the time and efforts and personal contributions of those active in their founding, installation, and upkeep. The opportunity is to improve these open spaces, connect them, create new ones that help to manage the stormwater that negatively impacts the community.

The EcoInnovation District also carefully studied the opportunity to reduce waste and reuse more and, creating district energy for all in the community. These activities can provide more resilient infrastructure for residents but also reduce costs and provide valuable materials like clean soil through composting that supports the efforts of local gardeners and farmers. 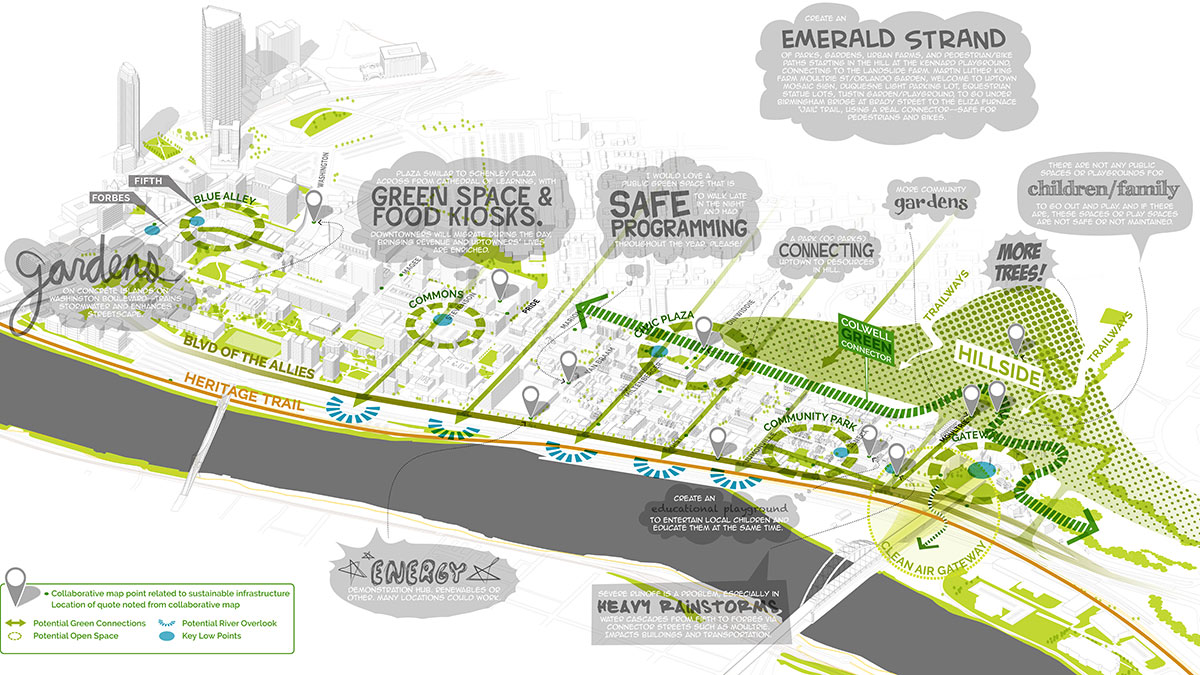 4.3 USE LANDSCAPE TO ENHANCE LOCAL QUALITY OF LIFE