Pittsburgh was changing rapidly. One-declining neighborhoods were experiencing a period of transformation, as existing properties were renovated and new housing was constructed at a renewed pace to accommodate increased demand for city-living. Businesses responded to the demand, with new restaurants, boutiques, and shops opening their doors in the City’s historic commercial districts. This change resulted in Pittsburgh being recognized as one of the top cities in the country to live, work, and play. The City was proud to be recognized for its strong neighborhood character its appealing mix of “grit and shine;’ that is, the gritty authenticity of a city that was built on hard work and heavy industry, and the more polished character of new development fueled by the growth of the City’s education, medical, and technology sectors.

Perhaps nowhere in the City does this interplay between “grit and shine” play out more visibly than along the City’s three rivers. The 35 miles of Ohio, Allegheny, and Monongahela Riverfront include parts of 19 different neighborhoods with distinct characters, economies, and topographies. Fueled by the City’s current zeitgeist, the demand for redevelopment along these 35 miles was (and is) high; new uses and users have been choosing to locate along Pittsburgh’s riverfront in close proximity to existing industrial businesses and residential neighborhoods.

The City’s previous industrial zoning did not adequately respond to the nature of the new mixed-use development and redevelopment occurring along the three rivers, in space that had once been used solely for industrial activities. Neither did it adequately protect the existing industrial entities that continued operations in the area and in many cases required river access to thrive. New regulations were needed to effectively balance new and existing uses within the City’s established goals of increased riverfront access, robust and equitable open space and trail systems, bank stabilization, improved public safety, and improved environmental quality. 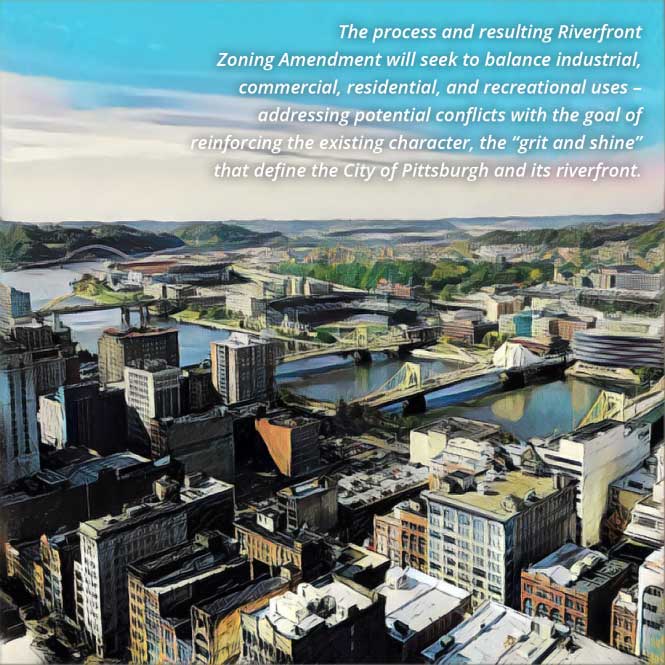 To temporarily address the lack of a cohesive riverfront zoning approach, and while a permanent solution was being developed, the Department of City Planning created a Riverfront Interim Planning Overlay District (IPOD), unanimously approved by City Council and adopted in June 2016. The Riverfront IPOD provided additional standards for some demolition, new or expanded development, and new or expanded surface parking with the objectives of ensuring riverfront access, improving public safety, providing for public and design review processes, understanding transportation network impacts, reconnecting neighborhoods with their riverfronts, and improving riverfront ecology and environmental health.

The Riverfront Zoning Amendment built on the Riverfront IPOD, as well as work from a number of previous planning efforts. It established an approach to land development that responded to the City’s changing economy, and that recognized and accommodated the diverse uses and characteristics of Pittsburgh’s riverfronts. The process and resulting Riverfront Zoning Amendment sought to balance industrial, commercial, residential, and recreational uses – addressing potential conflicts with the goal of reinforcing the existing character, the “grit and shine” that define the City of Pittsburgh and its riverfront.