Grandview Avenue serves many interests, and at times they may compete for use of the right of way. These include tourism and sightseeing, business district operations including valet and loading, special events, and everyday neighborhood activities.

Council District 2 identified the following issues along the Grandview Corridor when requesting Capital Budget money for improvements to the street:

Based on these concerns, the following data was collected on the corridor:

BEFORE - Speed and Volume Data at Grandview at Kearsage 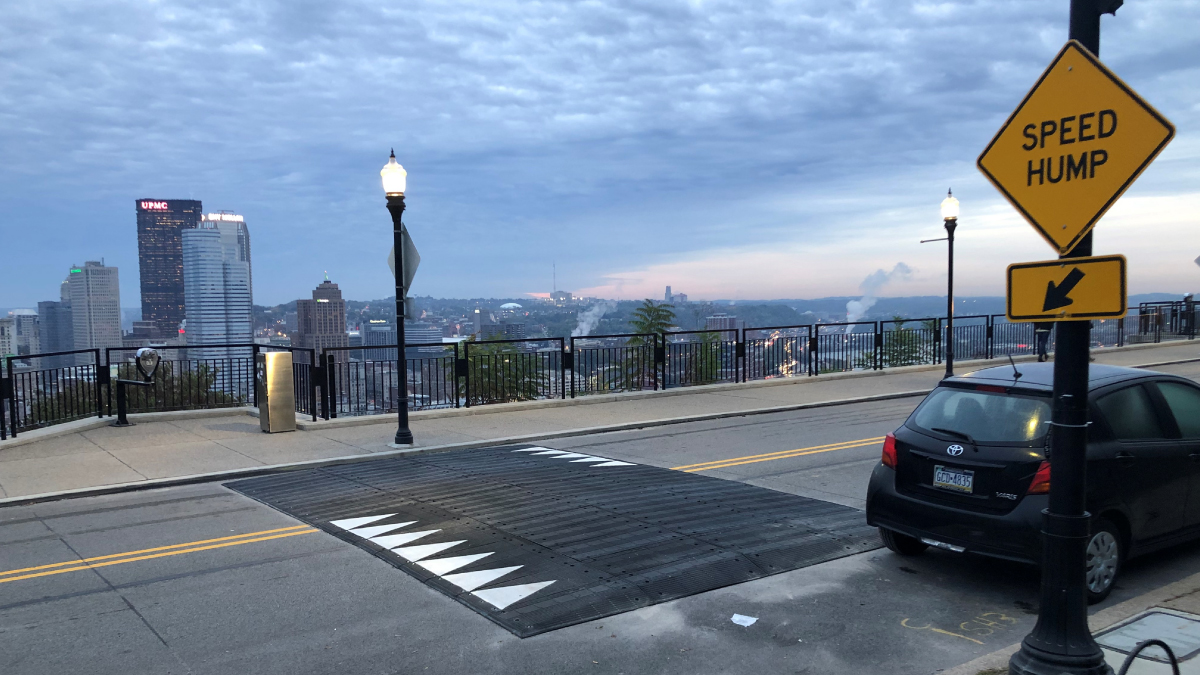 After the temporary speed humps were installed, traffic data was collected again.

AFTER - Speed and Volume Data at Grandview at Kearsage

Despite an increase in vehicles there the average daily speed reduced from 33 to 29 and the percentage of drivers speeding reduced from 61% to 36%. Based on the success the temporary speed humps provided in reducing vehicle speeds, new asphalt speed humps are planned to be installed in June 2020.

The City has received requests for additional stop signs along Grandview Avenue over the years, to assist pedestrians in crossing the street. Stop signs are typically used to control motor vehicle conflicts, and are generally not used for traffic calming. Studies have shown that unwarranted stop signs tend to cause motorists’ to “make up lost time”, and also may not be properly obeyed if there is little or no conflicting motor vehicle traffic (i.e., motorists will perform a “rolling stop”).

In Fall 2019 DOMI will be installing temporary rubber speed humps on Grandview Avenue between P.J. McArdle Roadway and Shiloh Street to discourage excessive motorist speed. Residents requested in advance that the speed humps be removed after a 60-day evaluation period.

The estimated construction cost of Grandview Avenue improvements is approximately $110,000. Post evaluation data will be published here after the project is complete.

The City received numerous request for a marked crossing across Woodruff Street at Merrimac Street. Additionally, residents have reported excessive speeding on Merrimac between Grandview and Virginia Avenues. 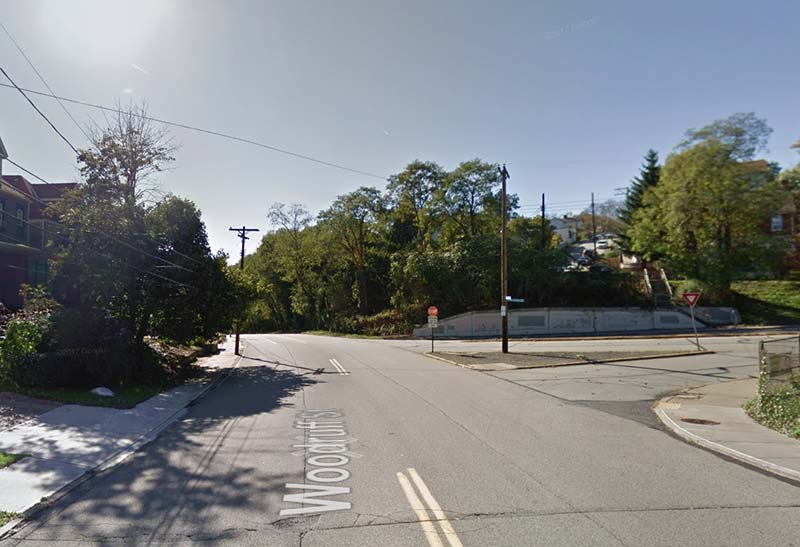 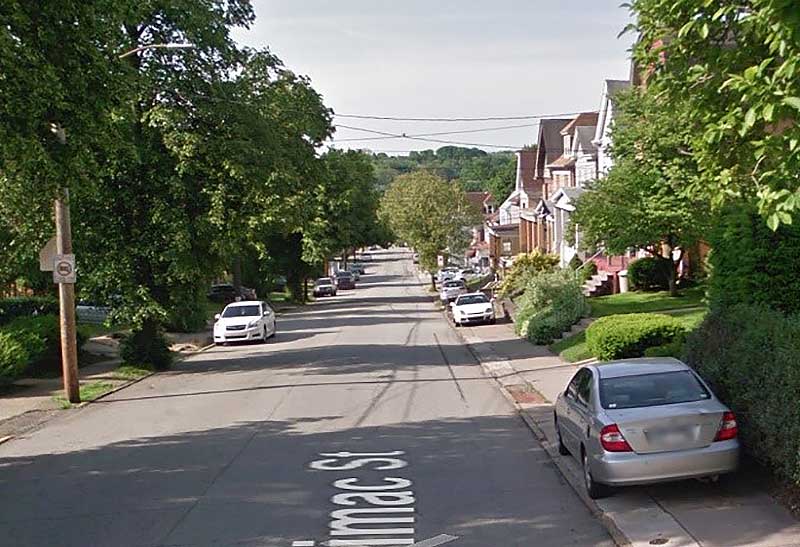 As one of a limited number of access routes to and from the Mount Washington and Duquesne Heights neighborhoods, Woodruff and Merrimac Streets have moderate traffic volumes of around 4,000 vehicles per day. Merrimac Street is 30 feet wide, and operates as a “yield street”. This means that opposing motorists must share the center of the roadway, and pull partially into a vacant parking space to allow the other motorist to pass. At current vehicle volumes and street parking occupancy, these opportunities to pull over are too rare. Due to this reason as well as excessive speeding, residents typically park vehicles completely on the western sidewalk. This provides more roadway space for motorists, it allows them to pass without slowing down or negotiating the right of way, and causes increased speeding on the street.

Aggressive driving and maneuvering was observed at the intersection of Merrimac and Woodruff Streets. Contributing factors include excessively wide effective roadway (up to 30 feet). PennDOT crash data reported 5 vehicles crashes during a five year period.

Speed and Volume Data at Merrimac Street at Sycamore Street

Speed and Volume Data at Merrimac Street at Woodruff Street

Parking Utilization at Merrimac Street between Virginia and Grandview Avenues 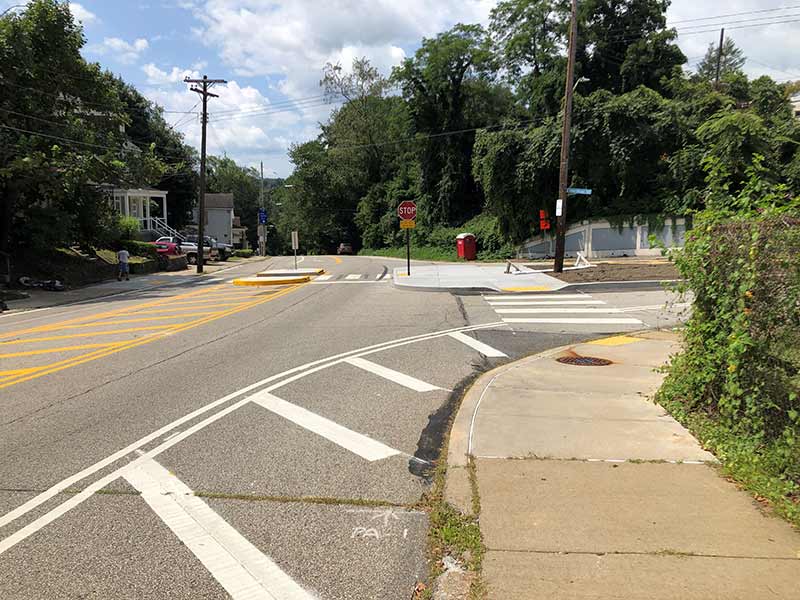 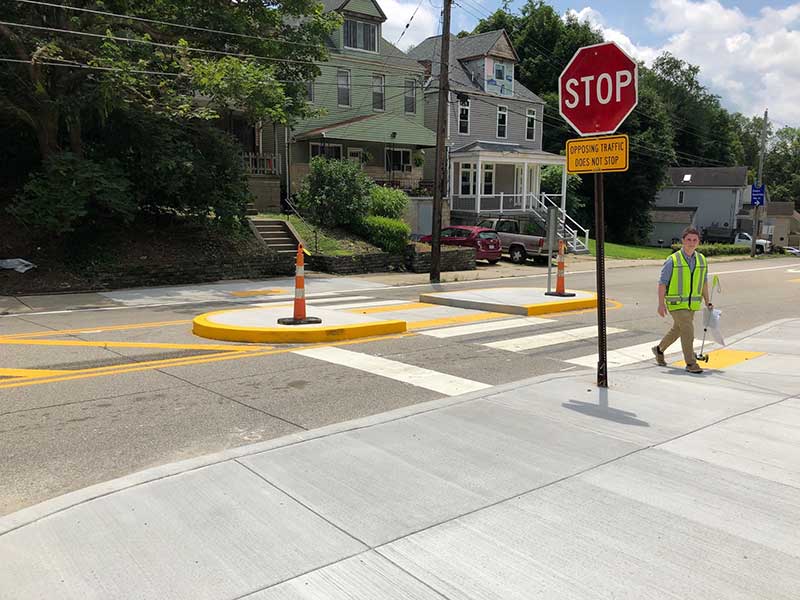 Traffic Calming and Pedestrian Improvements at Woodruff and Merrimac

In Summer 2019 DOMI installed a concrete pedestrian refuge island on Woodruff at Merrimac, and made modifications to the existing concrete traffic island. DOMI is evaluating the effectiveness of the improvements and may make changes based on those evaluations.

Due to parking utilization on Merrimac Street by residents who live on the street, changes to parking patterns were not desirable. Painted bump outs were installed at Merrimac Street at Sycamore Street to decrease pedestrian crossing distance and to reduce the perceived width of the roadway.

The estimated construction cost of the Merrimac and Woodruff Streets improvements is approximately $80,000. Post evaluation data will be published here after the project is complete.