Neighborways are low-traffic streets that prioritize pedestrians, bicyclists, and other non-vehicular traffic and offer a safer, more comfortable alternative to busy arterial streets. Neighborways typically run through residential neighborhoods and use context-appropriate traffic calming tools to keep speeds slow and safe for all users. They aim to connect neighborhoods and feature clear signs and pavement markings to help people easily navigate through Pittsburgh. Neighborways have been implemented across the city as a part of the MoveForward Program.

Through the Bike+ Plan, the Department of Mobility and Infrastructure has identified streets on the Bike+ network that meet the thresholds to be a Neighborway. These streets contribute to connections in the Bike+ Plan, but do not require dedicated bike lanes. Neighborways have minimal implications to existing on-street parking.

To be considered to become a Neighborway, streets must:

The traffic calming tools for each Neighborway are informed by data collection, street context, engineers’ judgement, and supplemental community input.

Pittsburgh’s first Neighborway was established in the South Side Flats. 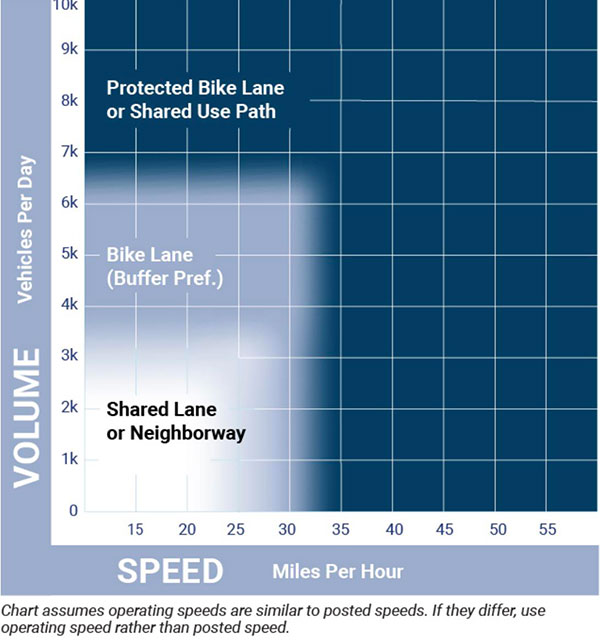 Photo: Graph showing volume of traffic vs. speed and what type of bike infrastructure treatment is suggested. Photo is taken from the Bike(+) Plan.

Like the streets and neighborhoods of Pittsburgh, every Neighborway is different. To achieve our goals of reducing speeds and increasing safety for all users, each block and intersection along the route may require different design solutions. These designs respond to the local conditions of the route. For example, a neighborhood street with excessive motorist speeds may get speed humps. A four-way, stop-controlled intersection may get a traffic circle to reduce the rate of vehicular collisions while modifying how different modes interact through the intersection. 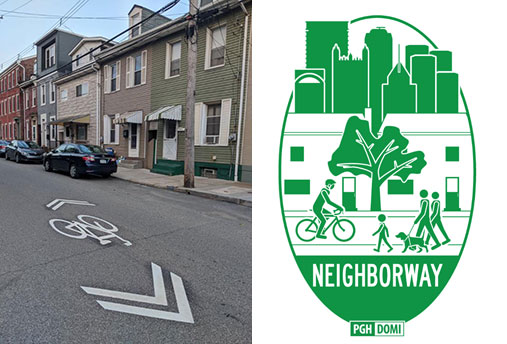 LEFT: A sharrow on the Central Lawrenceville Neighborway. Bi-directional sharrows like the one above are only used on narrow yield streets.
RIGHT: Neighborway signage included along each corridor.

Using concrete, pavement markings, and/or vertical elements, curb extensions (also referred to as bump outs) reinforce the distance from an intersection where parking is not allowed, increasing safety and visibility for all modes in our roads’ most dangerous areas - the intersections. In the State of Pennsylvania, it is illegal to park with 30 feet of a stop sign or traffic signal, or within 20 feet of a marked or unmarked crosswalk at an intersection. Keeping this space clear is important to preserve sightlines for all users approaching an intersection.

Neighborhood traffic circles are a tool best suited for streets with moderate speeding problems (generally, this means 85th percentile speeds fall below 30 mph) and concerns around intersection safety. They are an improvement to an existing four-way stop controlled intersection and feature a concrete circle at the center of the intersection. This circle prevents bicyclists and motorists from traveling straight through the intersection. Instead, they must slowly turn right around the circle until they exit the intersection. This turning movement improves safety by encouraging slower speeds and reduces the number potential conflict points. According to the Federal Highway Administration, traffic circles installed along a corridor are proven to reduce prevailing speeds 4-6 miles per hour. One case study in Seattle, WA saw a 94% reduction in crashes and a 99% reduction in injuries after installing their first neighborhood traffic circles in 1991. (Source: PEDSAFE Case Study No. 56: Neighborhood Traffic Circles)

Wider and less abrupt than the more commonly known speed bumps, speed humps encourage slower speeds and discourage unnecessary non-local traffic. They are designed to be comfortable for all modes to travel over when taken at appropriate speeds. This traffic calming tool is reserved for Neighborways with severe speeding, and also must have appropriate grades (less than 8%). Speed humps can be installed on roads that are not on the Bike+ Plan as part of DOMI’s Traffic Calming Program. 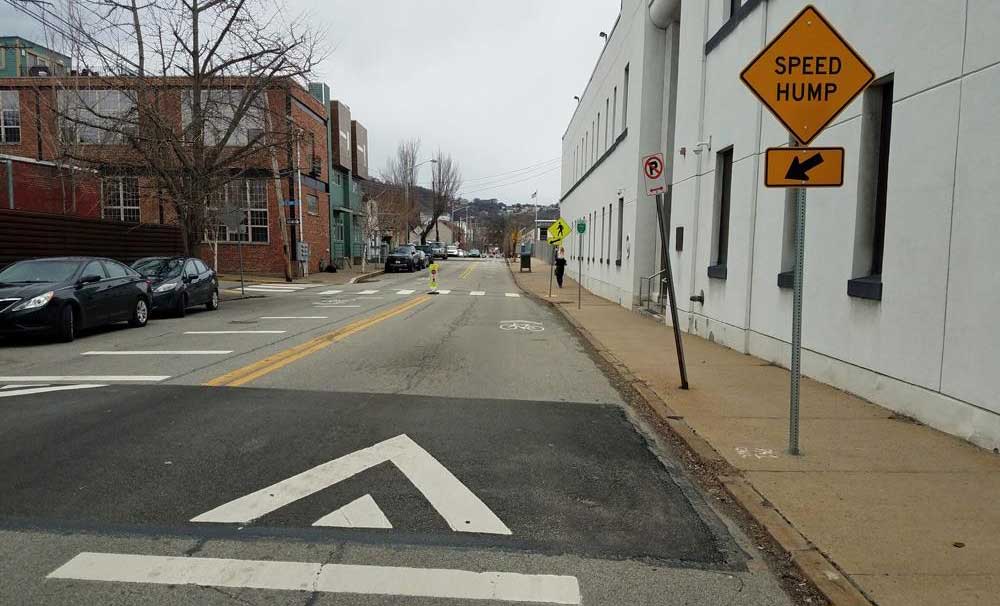 A speed hump on Muriel St, part of the South Side Neighborway.

Sometimes there are opportunities to connect Neighborways for bicyclists and pedestrians with ramps, trails, stairways with runnels, and other creative solutions. An example of this is the shared-use ramp that was installed in the South Side Neighborway underneath the Birmingham Bridge. 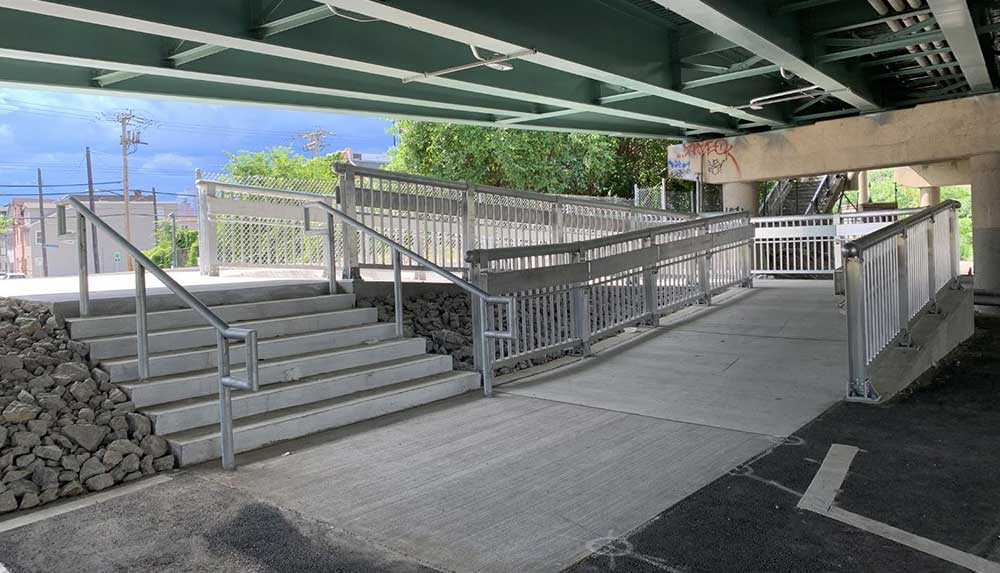 Critical gap solution installed in 2019 under the Birmingham Bridge as part of the South Side Neighborway.

For more information about current and upcoming Neighborway projects please see our Current Projects Page or the Move Forward Pittsburgh.