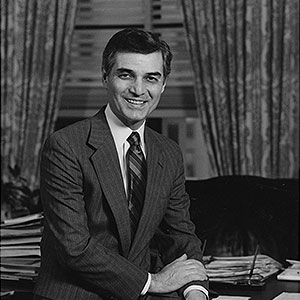 Dick Caliguiri began his career as a surveyor for the City Parks Department. He served as Director of that department under Mayor Barr and Acting Director of Public Works under Mayor Flaherty.

In 1970, he was named to a vacant seat on City Council, but was denied party endorsement when he joined Flaherty in opposing a mass transit system called “Sky Bus”. After a failed attempt at the Mayor's Office in 1973, Caliguiri ascended to the office in 1977 when as Council President, Mayor Flaherty resigned after an appointment tothe Carter administration.

Mayor Caliguiri’s Renaissance Two was based on a new public and private partnership that resulted in major construction in the Golden Triangle.

Mayor Caliguiri was diagnosed with amyloidosis, a rare and serious protein disorder. He would succumb to his illness in May of 1988. A widely popular figure, he would be memorialized with a statue erected on the Front Portico of the City-County Building.