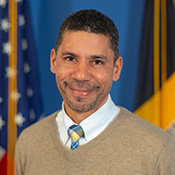 Ross Chapman serves as the Director of Parks and Recreation. Before being appointed Director, he served as Assistant Director of Personnel for the Pittsburgh Partnership. In his role, he is responsible for senior interest, recreation centers, fitness through Citisports and Citiparks tennis programs. Ross has the pleasure of overseeing engagement of residents through enhancing and expanding programs and services in Citiparks. Ross is a graduate of the Indiana University of Pennsylvania and the University of Pittsburgh’s Graduate School of Public and International Affairs. Ross resides in the Morningside.