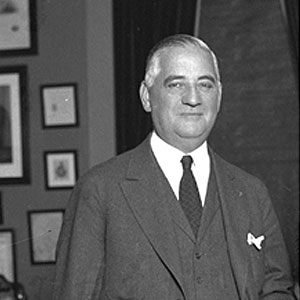 An attorney, Charles Kline first won election to the State House in 1904 and to the State Senate in 1906. Kline also served as City and County republican Party Chairman. In 1919, he gave up his Senate seat to his neighbor, Max Leslie in return for an appointment as judge.

In 1925, State Chairman, William L. Mellon and his steward, Senator Leslie convinced Mayor Magee not to seek a third term. In return for Magee’s support of Kline, Kline retained 25 of Magee’s top allies in his administration.

Kline would go on to be indicted on numerous charges of rigging City contracts. While it is legend that he was thrown out of office for the purchase of the oriental rug that remained in the Mayor’s Office through the administration of Mayor Sophie Masloff. He would be convicted and resigned from office in disgrace.

Kline began the collection of portraits of past Mayors.