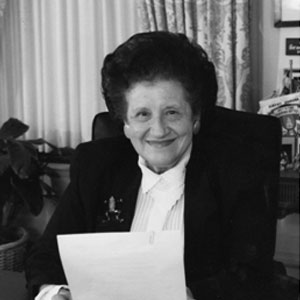 Pittsburgh’s first and only female Mayor, Masloff began her career as a clerk in the Allegheny Court of Common Pleas where she would serve for 38 years. Known as a hard worker who took no nonsense, she was encouraged to run for City Council where she served as City Council President at the time of Mayor Caliguiri’s death. As Mayor she was known for her sense of humor and colorful personality, once famously referring to the rock band “The Who” as “The How”.

Her administration was responsible for a vast improvement of the city’s navigation system. Previously very few Pittsburgh roads even had street signs. The blue sign system was created and is still in effect today. Another lasting legacy was her fiscal responsibility. Pittsburgh would privatize numerous costly assets such as the Pittsburgh Zoo, the National Aviary, Phipps Conservatory, and the Schenley Park Golf Course.

Perhaps her most famous action Masloff became the first Pittsburgh official to suggest the Pittsburgh Pirates be given their own baseball stadium outside of Three Rivers Stadium. Then criticized for her “Clemente Field” it would go on to be the inspiration for PNC Park and Heinz Field.