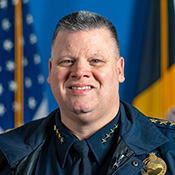 Scott E. Schubert is a 25-year veteran of the City of Pittsburgh Bureau of Police. Before being promoted to Chief in 2017, he served a variety of assignments as a Patrolman, Detective, Sergeant, Lieutenant, Commander, Assistant Chief, and Acting Chief.  During that time he was responsible for duties in Patrol, Investigations, Special Deployment Division, Homeland Security and Special Events Planning. Chief Schubert is accountable for the overall command of  supervisors, detectives, uniform officers and civilian staff assigned to Six Police Zones, Special Deployment Division, Investigations, and Support Services.