Pittsburgh is defined by many things, most notably its colors of Black & Gold. The only city in the nation where all of its professional sports teams share the same colors, their history runs much deeper than athletics. In 1816, when Pittsburgh was officially chartered as a city, an effort began to formalize the colors that had been unofficial since 1758. A City Seal and official standard were adopted based on Sir William Pitt’s family coat of arms. This is the source of Pittsburgh’s Black & Gold colors.

The basis of the Great Seal of the City of Pittsburgh is the family coat of arms of William Pitt the Elder, Earl of Chatham (1708–1778), who was Great Britain’s secretary of state during the Seven Year’s War (1756–1763) and later Prime Minister (1766–1768). After the defeat of the French at Fort Duquesne, British General John Forbes named the city on November 27, 1758 in honor of William Pitt. Pitt devised the military strategy that enabled Britain to beat the French in this region––and around the world. He was the man most responsible for seeing that British General John Forbes’ army of more than 5,000 soldiers and Virginia colonists was kept well-supplied in 1758 as they marched through the wilderness to the Point.

All papers documenting the original design of the City Seal were apparently destroyed in the Great Fire of 1845. Therefore, after the Great Fire, a gentleman named Mr. Jones was hired to make a seal based on the recollections of people who had actually seen the seal.

According to Doug MacGregor, museum educator at the Fort Pitt Museum, “The origin of the three gold coins goes back to Byzantine times. They are actually called bezants and represented real money and it became a symbol of honesty in coats of arms. While making the seal of Pittsburgh in 1816, the draftsman was confused as to what they were called and thought they were called ‘pheasants’ instead of bezants. The draftsman thought pheasants were not a majestic enough bird for our seal so he made them eagles on the Pittsburgh seal. Blue and white were the Pitt family livery colors, the colors they wore on their robes when going into Parliament.” The checkerboard pattern symbolizes finance and commerce, suggesting a cloth with coins placed on it, creating a checkerboard pattern. So we have a shield with a black background, crossed by a blue-and-white checkerboard, showing three gold coins––all elements from the Pitt family coat of arms––with embossed American eagles, topped by a castle. A castle symbolizes “city” in the language of heraldry.

Therefore, the City Seal can be translated to mean “the City of Pitt in America.” (“burgh” is another word for city or town). In 1950, Pittsburgh officially adopted the Pitt family motto for the City of Pittsburgh: Benigno Numine, a Latin phrase meaning “By Divine Providence.” 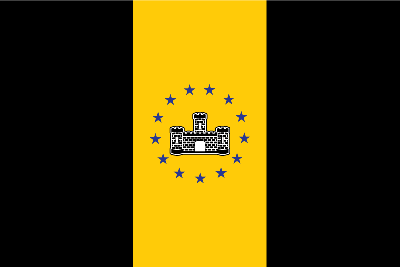 The Merchant Flag of the City of Pittsburgh

A merchant flag is defined as "a flag flown by the merchant vessels of a country". Pittsburgh City Code defines our merchant flag as follows -  The City ensign or merchant flag shall be composed and parted as provided for the civic flag or standard in subsection. Except that instead of the entire City arms, there shall be blazoned upon the central pale the crest of the City arms, surrounded by thirteen five-pointed dark blue stars, in a circle, whose diameter shall be four-fifths of the width of the pale. The length or fly shall be six feet, the depth or hoist four feet six inches or in proportion thereto. 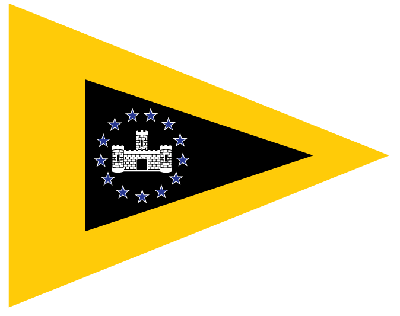 The Pennant of the City of Pittsburgh

Pittsburgh City Code defines our pennant as follows - A triangular piece of gold bunting five feet in length by four feet in width, or in proportion thereto. In the center thereof shall be placed a black triangular field two feet in width and three feet in length, upon which shall be displayed the crest of the City arms and a circle of blue stars, as borne upon the City ensign.

Streamer of the City of Pittsburgh

Pittsburgh City Code defines our streamer as follows - The City streamer shall be made of materials and colors above indicated two feet in width and fifteen feet in length, or in proportion thereto. The black shall be borne next to the staff, and shall be in length one-fourth the length of the streamer, and shall bear upon the center thereof the City crest, gold or gilded.