History of the Badge

In 1873, the Police Badge was designed and officially adopted by the City of Pittsburgh. The badge is a unique design: The crest is from the Coat-of-Arms of William Pitt, the first Earl of Chatham, and the man for whom Pittsburgh is named. The garter around the badge is linked to King George III, the last English ruler of the American colonies. The shield is a circular fighting shield used by 15th century Greek foot soldiers. During the 16th and 17thcenturies, the circular shield was used extensively in the British Isles, hence its appearance in Pittsburgh. The Pittsburgh Police Badge with its distinctive design and history is worn with great pride by the men and women of the Pittsburgh Bureau of Police. 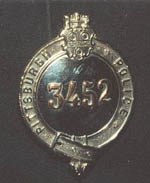